What many don’t know about the Australian dairy industry

The average person probably thinks that the dairy industry is simply about gently squeezing milk from the udders of happy, contented cows.

Nothing could be further from the truth.

The problem is that dairy is a for-profit business. Everything revolves around extracting as much milk possible for the lowest cost, with little regard to the welfare of the animals involved.

To produce as much milk as possible, cows in the dairy industry must be made pregnant every twelve months so they lactate and produce milk. 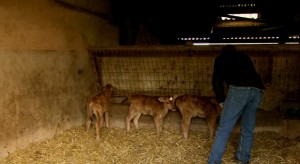 This means that most of the babies born to these cows in the dairy industry are useless to farmers. For example, if they are male calves, then they are unable to produce milk. These “useless” babies are often destroyed or sold for veal (which is really a nice sounding euphemism for baby cow flesh).

Typically, calves are sent to slaughter at around 5 days old. These calves are called bobby calves.

Over a million baby cows in the dairy industry are slaughtered every year in Australia. Most of this slaughtering is done at an abattoir.

Calves who are induced (see next section) can be either still-born, unviable, or sold for slaughter. In Australia, legal means of destroying these unviable calves on farm include:

Day old calves in the dairy industry lie dead after being shot in the head.

Dairy farmers like to have all their cows give birth at much the same time. Any cow who looks to be giving birth late can be induced, which means she is injected with a drug to force a delivery. In one veterinary study, of 1449 cows induced, 36% resulted in still-births and 305 calves had to be killed.