Separation of cows and baby calves 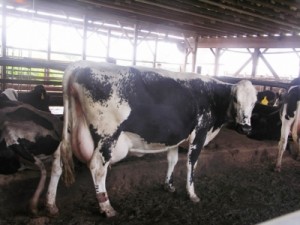 One particularly cruel aspect of dairy relates to the separation of mother cows and baby calves. Mother and baby calf must be separated otherwise the baby would drink most of its mother’s milk, leaving little for the dairy farmer.

Cows and their calves form strong bonds and the separation causes intense distress to both.

If you were a mother, how would you feel if your baby was taken away from you as soon as it was born?

Professor John Webster of the British Farm Animal Welfare Advisory Council described the removal of the calf as the “most potentially distressing incident in the life of the dairy cow. The cow will submit herself to considerable personal discomfort or risk to nourish and protect her calf”. Observers have described cows mooing frantically for days following separation from their calves, and sometimes breaking down fences and walking for several kilometers to be reunited with their babies.

Female calves may later join the dairy herd to face the same cycle of constant pregnancies and separation from their babies. Male calves and surplus females may be reared for veal or may be slaughtered when just a few days old, to end up in pet food, fertilizer and cheap cuts of meat. Not being primarily bred for meat, their flesh is considered substandard by the beef industry. Everyone who eats dairy products is complicit in the grisly deaths of these innocent young animals, without whom milk could not be produced, and to whom it rightfully belongs.

To produce the maximum amount of milk, cows in the dairy industry are pushed to their physiological limits through a combination of selective breeding, high-protein supplementary feeds, and the latest technology. 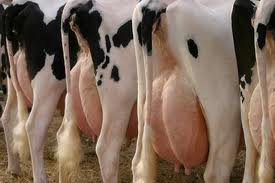 Over the past 10 years the milk yield per cow has risen by around 25%, and is more than 10 times the amount a calf would naturally drink. The strain of ever increasing yields and the restriction to 2 milkings per day, rather than 5-7 sucklings by a calf, can cause serious health problems.

In the past three decades, Australian cows in the dairy industry have been selectively bred to double their lactation – now producing an astonishing 5,525 litres of milk annually, a massive increase from 2,848 litres in 1979. (VoicelessReport_Life_Of_The_Dairy_Cow_p.5_2015)

The second leading cause of death for cows in the dairy industry is chronic mastitis, a painful bacterial infection of the teats and udder. A survey of Victorian farms also found that 88% of herds were affected to some degree by lameness. High yielding cows are prone to ketosis, where the cow’s metabolism cannot keep up with the demand for milk, causing her to metabolise her own body fat and resulting in severe liver damage.

The escalating trend towards supplementary feeding with concentrated high protein foods which the cow would not naturally eat, also results in a high number of painful digestive disorders. Many dairy cows are “culled” each year as a result of health problems.

“A cow’s a piece of machinery. If it’s broke, we try to fix it, and if we can’t, it gets replaced” (Dairy farmer quoted in Scientific Farm Animal Production).

Cows in the dairy industry undergo routine mutilations such as tail docking and dehorning without anaesthetic, although a study by the Tasmanian Department of Primary Industries and Fisheries has concluded that there is no evidence that these provide any health benefits or improvement in milk quality.

Horns are extensions of the skull and contain blood vessels and nerve endings, so their removal is agonising. Tail docking may result in the formation of neuromas, abnormal masses of nerve endings which produce chronic distress. Docked cows also suffer greater fly irritation. Routine tail docking of dogs has now been banned in Australia in recognition of the fact that it causes pain and distress. Cows suffer no less.

Under natural conditions, a cow can live 15 to 20 years. The average productive life of a cow in the dairy industry is 3-5 years, after the first milking at about 3 years. Her milking life has steadily decreased as the demands on her body increase. Once she stops producing milk in profitable quantities, she is sent to slaughter. There are no peaceful paddocks where retired dairy cows relax after their years of service. The fate of these young animals, in what should be the prime of their lives, is the same as that of their counterparts raised for beef. Their skulls are smashed by a steel bolt, their throats are cut, and their bodies dismembered to be made into sausages, pie fillings and pet food. The myth that animals do not suffer and die so humans can eat dairy foods is a comforting fantasy which bears no relation to reality. Dairy is a slaughter industry the same as meat production, only the violence and bloodshed are one step further removed from the consumer’s plate. 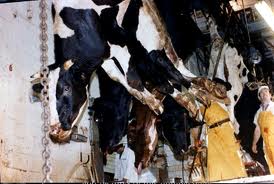