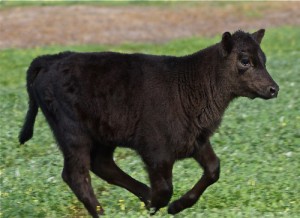 Ernie and Beatrice came from a dairy farm in July 2013 at around one week of age. They do not look like your average dairy cows as they are angus cross.

Ernie was due for slaughter just based on the fact that he was male, but he also had another problem. Ernie was born with a deformity in his hooves which made it almost impossible for him to walk.

Ernie was placed with his foster mum Anna-Marie and received special care and veterinary attention for his condition. He got to be loved and lie peacefully in the sun and it seemed that progress was being made to straighten his hooves.

Sadly an infection took hold and the heart wrenching decision was made to have our precious Ernie euthanized. We took comfort in the fact that Ernie had known love and kindness and that his passing was gentle and not on the killing floor of an abattoir.

Beatrice is, to date, the only female we have rescued. While we were at the dairy to pick up Ernie the farmer told us that he had a female calf who was not feeding. “I don’t have time to mess around with her so if you don’t take her she will starve to death”, he told us. So of course we took her as well.

Bea was feisty from the start and she thrived with her foster mum Anna-Marie and continues to thrive at the sanctuary she now calls home. She is big sister to three more bobby calves.

Beatrice and Ernie came into my care as shy, lonely little calves that didn’t know where they belonged in this world. Ernie had been born with contracted tendons (crooked legs) and Beatrice had been reluctant to suckle. Both were considered wastage of the dairy industry.

Ernie could only hobble around on his fetlock joints and tired very easily, but he had a strong will to live. He was the first of the two calves to suckle from the bottle and the first to try grass and calf meal – he was always hungry! 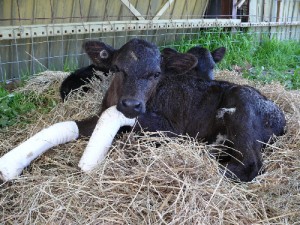 Ernie had wounds on his fetlocks which were cleaned and his legs were splinted by a veterinarian. He was always so well behaved, even though it would have been an unusual and uncomfortable experience. He always tried to follow Beatrice and me with a sad look in his eye.

After splinting there was an improvement and I was hopeful all would turn out well for this sweet little calf. Unfortunately it did not last and Ernie slowly went downhill. He ended up with an infection and the vet advised to put him to sleep. Even when administered the drug it seemed Ernie would not give up. He lay there unconscious but breathing for a great length of time until the vet finally administered it straight to his heart. He was such a brave little calf that never gave up, and would not have complained about his lot in life even though he had every right to do so.

Beatrice was either very smart or very lucky! We had hardly any troubles encouraging her to suckle, but if the farmer knew that she would have had a very different life! Beatrice was very shy and uncertain at first but after a couple of days she came out of her shell. We then discovered she was a curious little trouble maker, full of personality!

Beatrice would call out to us whenever we left her, especially once Ernie had died. Her favourite game was to run after us and jump over logs and kick her heels up in the air. She would come running when we called her name unless she knew she was in trouble. She loved a good scratch under her neck.

Once she was weaned Beatrice went to live at a sanctuary. 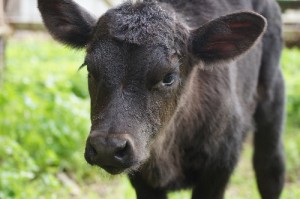